Using the ARMv8-M TrustZone with GCC

Concepts behind the ARMv8-M TrustZone

This article is the result of my first steps with the new nRF9160 System-in-Package of Nordic Semiconductor. This SiP can be used to create IoT sensor nodes with cellular connection to the internet. It integrates a modem for the new „IoT optimized“ low-power variants of the LTE standard namely NB.IoT  and LTE-M which is targeted to replace traditional M2M connectivity using 2G networks.

Conceptual the SiP is very interesting to us at Lobaro because it breaks with the widespread concept of having one application microprocessor talking over serial line using AT commands with a separate cellular modem. Beside this it uses the latest ARM Cortex-M33 CPU core with new security features targeting especially secure IoT applications. The LTE modem is directly integrated into the SiP and communicating with the application processor using interprocessor communication based on shared memory. This tight coupling allows for better low power optimization and smaller PCB footprints beside easier securing the IoT node.

The Cortex-M33 processor inside the nRF9160 uses the new ARMv8-M architecture which offers a new feature called „ARM TrustZone„. The following article reflects my interpretation of the underlying concepts and their practical application using the GNU ARM GCC compiler and its CMSE (=Cortex M Security Extensions) Features. Since there is currently (May 2019) not a lot of information to find online I hope this article may help you to have a quicker start into the topic than I had.

Although I am using the nRF9160 Cortex-M33 SiP most concepts provided in the following are also valid for other ARMv8-M enabled Cortex-M33 and Cortex-M23 devices of different silicon vendors. The same holds for using other ARM compilers than GCC. 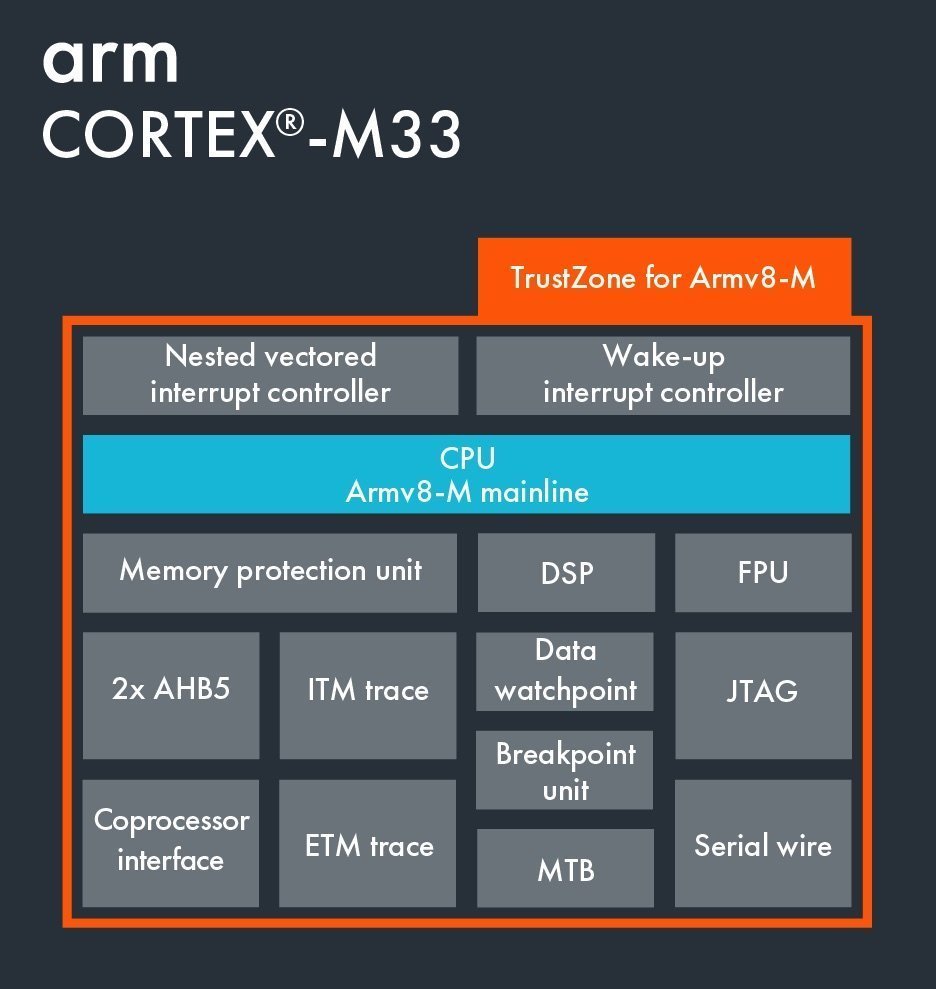 Additional to the classical Thread (normal Code) and Handler (IRQ/Exception code) CPU operating states the ARMv8-M architecture introduces secure and non-secure attributes. After reset the CPU always starts in secure mode and can access all memory regions and use any peripheral without restrictions. This is like the normal operating mode of older architectures like the Cortex-M4 or Cortex-M3. Your ARMv8-M based CPU may stay in this mode without using the TrustZone features but then the creation of secure applications becomes harder. You have to double check on every piece of your code, because if there is a bug an (remote) attacker may gain access to your complete system and / or stored credentials.

The idea of the TrustZone is to hide security relevant code, data and peripherals in a small region of the device. This region will be called „secure“ whereas the other parts of the device will be treated as (potentially) „non-secure“. The partition of memory regions, interrupts and peripherals into secure and non-secure is up to you. Normally your first lines of code after power-on will perform this decisions based on your application needs. In the „Secure Partition Manager“ code example for the nRF9160 Nordic decided to use a flash memory partition of 256kB secure and 768kB non-secure.

The non-secure firmware must not be aware of the existence of the secure firmware. It may be „normally“ developed and deployed like on older cores with its linker-script pointing only to the non-secure memory regions defined. After jumping in the non secure firmware the CPU runs in non-secure mode and can not directly access any secure code, data or peripherals anymore without triggering a security exception. The only valid way that persists to access secure functions from non-secure code is the invocation of special gateway / entry / veneer functions the secure side may provide. The rest of this article demonstrates how this works in detail using the ARM GCC and its implementation of the CMSE (Cortex M Security-Extensions).

To allow non-secure -> secure function calls some (tiny) part of the secure flash region must be configured as „Non-secure callable“ (NSC) in the secure firmware code. On the nRF9160 this is done by using the SPU peripheral.

This instructs the compiler to automatically generate two code parts for the above described process if compiling with the „-mcmse“ ARM gcc flag.

The actual function body will be placed by the linker in the secure .text section as usual, but the part with the SG and branch instructions will be placed in a special section called „.gnu.sgstubs“ or similar for non GNU C compilers.

The small redirect functions in the NSC region are also called „veneer“ functions or „SG stups“, because they are so small doing only one SG instruction and a branch. The linker file of the secure firmware must place any veneer code in the secure memory region which the secure firmware will declare as NSC as part of its secure boot process before jumping in the non-secure firmware.

The optional „–in-implib=CMSE_importLib.o“ may be used to keep entries already defined in older versions of the object file at the exact same memory location also in the new version. This enables additions to the secure image without the need of updating the non-secure image as well (which may have been linked against an older version of the import lib before).

Using the .h file and linking against CMSE_importLib.o object the non-secure firmware can now invoke the ControlCriticalIO() function from the example above.

This article demonstrated how ARM TrustZone can be used to create two isolated firmware parts connected by well defined tiny gateway / veneer functions. These allow functions of the secure firmware to be called from the non-secure firmware.

The „nonsecure_call“ attribute is needed to instruct the secure compiler to clear the non banked general purpose registers before jumping back in the non-secure code since not doing so would be a potential security risk. Beside this it instructs the compiler to clear the LSB of the function-pointers address in the underlying branch assembler instruction. By doing so the CPU will transit from secure to non-secure state within the branch.

Because the given non-secure callback has to be treated like a volatile variable, which content may be changed by non-secure interrupts, the function-pointer copy „cb“ is needed. Before invocation of the callback its pointer has to be checked for pointing to non-secure memory only. If it would point to secure memory it would be a security risk too. 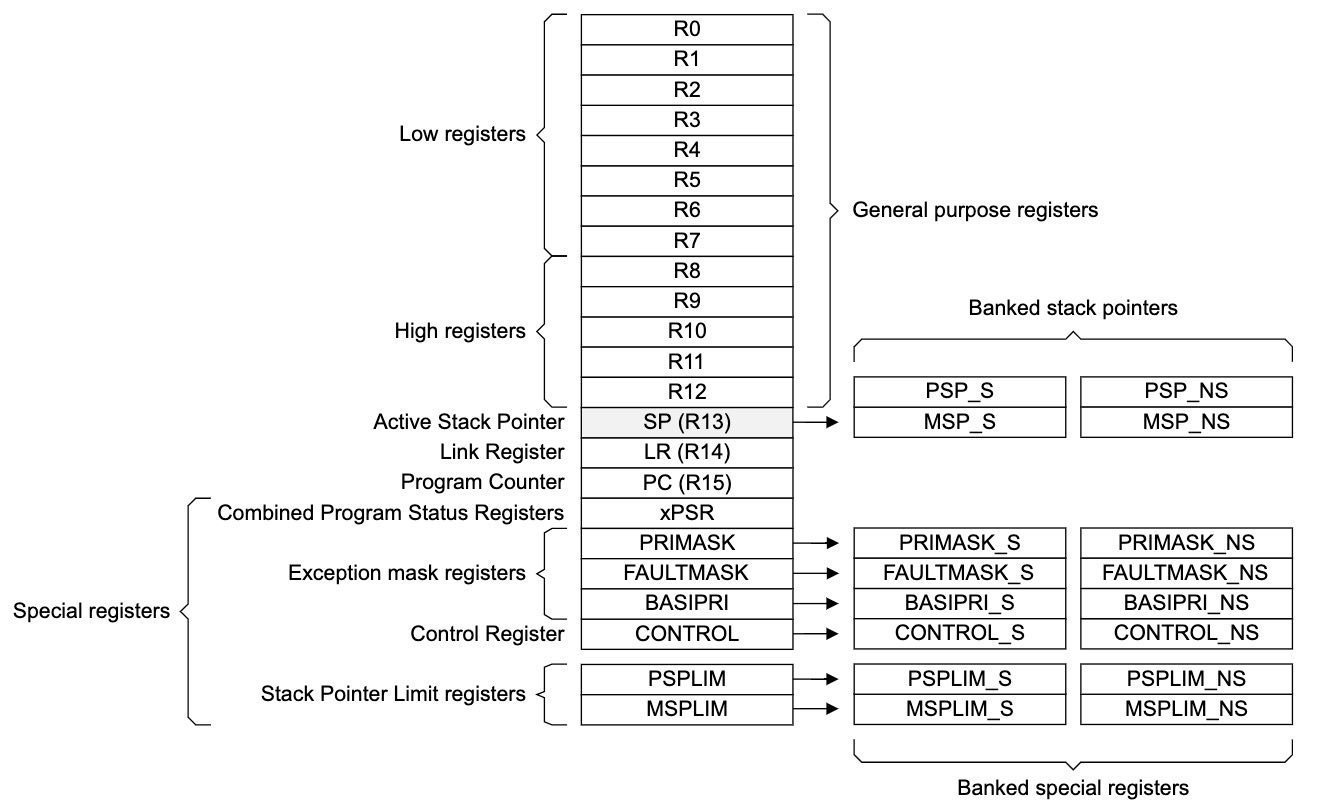 Keep in mind that the linkerscript for the secure side must consider the section for the veneer functions and the linkerscript for the non secure side must reflect the memory partitions made in the secure firmware. If including non-secure callable functions in an archive (*.a) file it must linked with the „whole-archive“ linker option to the secure firmware. Only this way the CMSE import lib will include the needed veneer functions.