When setting up a new computer (fujitsu esprimo p410) today in our office we had a strange problem with the Copper (Cu) CoAP Firefox plugin:

The connection to our (embedded) IPv6 CoAP servers was very poor. Our UDPv6 packets were all sent but the servers responses got lost and Copper (Cu) timed out. But Wireshark showed the correct incoming packets! From time to time very small datagrams came through, such as 4 bytes CoAP pings. Very Strange!

At first we thought of a firewall problem, but what it was not. Also other computers had no problems to reach our embedded CoAP server from the same network.

Then we tried to connect to our network via wifi instead of the wired LAN…with success!!! Over wifi everything worked as expected. So we had a closer look to the Realtek network card used in the pc under observation…

We found this blog entry and disabled „UDP Checksum Offload (IPv6)“ -> now everything was working fine! 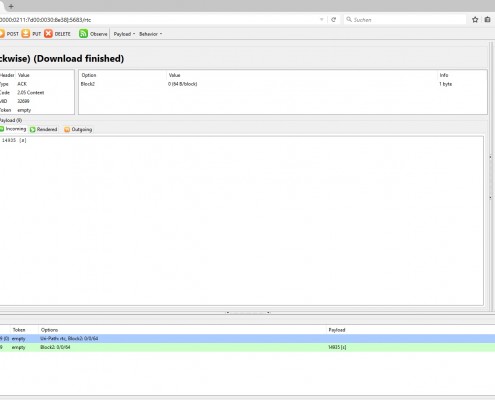